Wooden Sandals are armour that is equipped in the Boots slot. They can be bought from a Boot Trader or looted off of Bandits.

They provide no protection, but increase the wearer's effective Athletics skill, allowing them to run faster. Asides from that, they also provide a slight bonus to Combat speed effect.

This footwear has inventory dimensions of 2x4.

Wooden Sandals are simple footwear made from wood. They are similar in appearance to the Japanese Geta. A leather band keeps the sandals held in place on the feet. 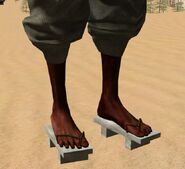 Wooden Sandals can be crafted at a Clothing Bench.

If the player looks closely at the feet of their character, they can notice that their feet are "floating" slightly above the ground (unless the character is a Hiver), it is likely made so that it fits wooden sandals so if the characters put them on it will not appear as if it's buried into the ground.