The United Heroes League is a faction of self-proclaimed "city heroes" that operate around United Cities territory. Made up of Greenlanders, they are hostile vigilantes and bigots, opposed to foreigners and nonhuman races. Lord Mirage and many city heroes can be found at Fort Mirage in The Great Desert.

Patrols may follow and harass your Shek, Skeleton, or Hiver characters. If they still follow you and you leave the city with them, they could attack. However, they seem to tolerate Scorchlanders.

They are a guaranteed spawn in Sho-Battai at either of the bars or food stores, and can easily be lured to City Gate guards.

The squad is generally composed of 1 Hero Boss carrying a rusted Nodachi, and 2 of each hero type, which only differences are their helmets. Their chest-pieces sell for 700 each, which is a good way to make money in United Cities territory early into the game.

The Traders Guild will hire them as expendable troops for their Base Assault. 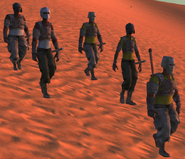 A patrol of heroes in The Great Desert.

Heroes caught in a battle against a Skimmer.

The factions this faction has special relations towards. For all others, it will use this faction's default (0).