The United Cities (A.K.A. "The Empire") is an expansive, feudalistic slaver society that controls large portions of land across the continent. Ruled by Emperor Tengu, they are a highly corrupt empire and monetary worth is the prime measure of a person in their culture. So much so, that being poor and hungry is a crime that can get you arrested. The drug Hashish is highly illegal, and the samurai guards are obsessed with purging it from their streets.

Slavery and serfdom are important pillars of their empire, providing food and material. Anti-slavery ideologies are considered extremist perspectives and treated as a form of terrorism. Another pillar is the Traders Guild. The guild brings their cities great wealth and prosperity. They have advanced technologies, higher quality equipment, and valuable luxuries imported from distant lands.

Though the United Cities is quite diverse, there is also a great deal of racial stratification. The nobility is mostly comprised of Humans and Sheks, while Hivers are disproportionately more likely to be peasants. Nonhumans in general are derided in UC newspapers, and are at risk from being attacked by roaming vigilante mobs known as City Heroes. Empire Peasants are often found in the Empire's locations and areas.

The Empire is ruled by the Noble Circle, a cabal of extremely narcissistic, cruel, and entitled lords and ladies. They are known for hunting peasants for sport, making outlandish requests to their guards (such as ordering them to train a pet Leviathan), and generally lacking concern for the lives of anyone beneath them.

Samurai are the leading military and police force of the United Cities.

The United Cities does not tolerate Hemp and Hemp-related goods and production facilities. Owning any building such as Biofuel Distillery (Hemp), Hemp Farm, Hemp Processor or a Hydroponic Hemp will result in a Drug Bust raid against the player if this building is discovered by the authorities. It is likewise illegal to possess or import Bloodrum, Hashish or Hemp into the Empire, despite evidence of use and possession of said substances by the Nobles. One rule for them and another for anybody else is very much what the Empire stands on.

Members of this faction can colour armour and clothing due to a colour scheme attached. 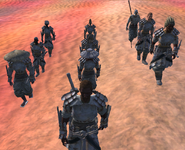 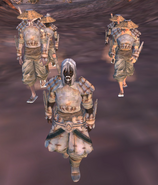 The Noble Circle is the ruling class of the United Cities. The emperor is elected from this group. The Noble Circle includes Emperor Tengu, Lady Sanda, Lady Tsugi, Lord Inaba, Lord Shiro, Lord Nagata, Lord Ohta, Lord Yoshinaga and Lady Merin. Attacking any of these characters will severely harm your relations with this faction. It is also possible to influence the World States by attacking these characters.

The Noble Circle also may include the Nobles of the Traders Guild and the Noble Hunter.

*These characters do not spawn naturally. They may only spawn when certain World States are achieved or during Events.

Generic Characters will spawn as these Races (relative chance):

Armours located in shops of this Faction can have these qualities (relative chance):

Machinists and Tech Hunters make use of the United Cities legal system.