The Dancing Skeleton is a unique bar only found in the city Shark. Swampers run the bar and have Empire Mercenaries stationed to maintain peace among the local gangs and other unsavory characters. Players can speak to the Swamper Barman to gather information about the local gangs or trade goods. Many patrons and eager followers can be found here from Bar Thugs to Mercenary and even Skeletons (dancing not included).

Depending on World States, there may be a Independent Bar found in these locations:

This location also happens to sell all of the Letters From A Swamper. 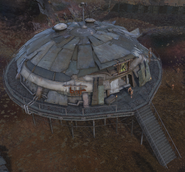 Add a photo to this gallery
Retrieved from "https://kenshi.fandom.com/wiki/The_Dancing_Skeleton?oldid=60159"
Community content is available under CC-BY-SA unless otherwise noted.