The Starving Bandits are a weak, hostile faction with very little organizational structure. They are found roaming primarily in and around Holy Nation lands.

This faction doesn't have any named characters, bases, or an overall faction leader.

They are made up from the hopeless and penniless characters who have resorted to banditry to feed themselves. Whether blood or fortune, they will do whatever it takes to survive in the desolate badlands. Due to their fragile states, many are weak and untrained for combat, but they have strength in numbers.

They will attack neutral targets on sight, or beg them for money on occasion, and will also attack wild animals in order to butcher them for meat.

Engagement between Starving Bandits, Dust Bandits and The Holy Empire in the Old World. 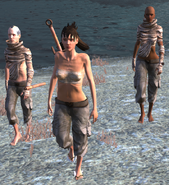 Starving Bandits on the Northern Coast.

This faction has no Unique Characters.

This faction has no special relations with any factions. Their default relation is -10.