This article is about the faction. For the location, see Southern Hive (Location).

Southern Hivers are mostly identical to Western Hivers, except for the pink coloration of their skin and white line patterns covering their bodies. Compared to their western cousins though, Southern Hivers are far more aggressive. They are obsessed with devouring and/or sacrificing any intruder or Hiveless to their King. Because of their intense xenophobia towards the peoples of "the Faraway", as they call the lands outside their territory, Hiveless/Ronin Southerners are extremely rare.

Members of this faction can colour armour and clothing due to a colour scheme attached. 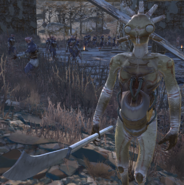 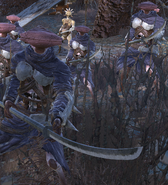 The factions this faction has special relations towards. For all others, it will use this faction's default (-50).