watch 04:21
Wiki Targeted (Games)
Do you like this video?
Play Sound

They are constantly in a power struggle with their rivals, the Swamp Ninjas. 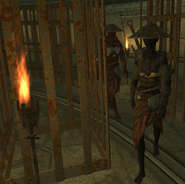 Add a photo to this gallery

This faction is always hostile when approaching the player.

The factions this faction has special relations with. Most others will use the default (0), bandits use (-100).

Retrieved from "https://kenshi.fandom.com/wiki/Red_Sabres?oldid=73802"
Community content is available under CC-BY-SA unless otherwise noted.