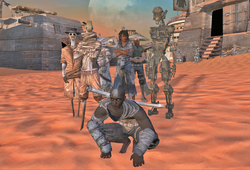 Players start Kenshi with a set number of player characters to customize depending on their selected Game Start. Across the world of Kenshi, there are many characters who can become player characters after certain interactions. After recruiting any number of these characters, players can control each squad member as well as all of them at once.

The maximum number of characters you can control is 30. This can be increased with mods fairly easily. Once players have reached 30 characters total, dialogue options will no longer appear for recruitable characters. Instead, they may notice drifters hanging around and even protecting your town without a word. Note that having more characters is more computationally demanding and can affect game performance.

Most characters that can join the player must also be "Recruitable". Which means that they must have 25 or lower in Strength, Dexterity, Melee Attack, Melee Defence, Martial arts, and Dodge or lower than 75 cumulative total in those stats, if any of them are above 25. They also must not be a Diplomat, Law Enforcer, Military, or Trader class character. Though there are a few exceptions to these rules, due to dialog loopholes.

Most Recruits join the Player Faction through dialogue options found in towns. Recruits for Hire can be found patrolling town or hanging out in a bar. These recruits have a set fee for joining and become Player Characters immediately after receiving that money. This fee is generally between 3,000 to 7,500 cats.

Characters for Hire can be randomized Generic Recruits or Unique Recruits. Most randomized recruits start with very low stats, rag clothing, a simple weapon, and hunger. Unique recruits often have a few elevated stats (10-15) depending on their specialty (i.e. Medic) but are still relatively weak.

Slavery is prevalent across the world of Kenshi. Some Slaves are happy to serve their masters, but most are very appreciative to be freed by the Player. After freeing Slaves and Prisoners, they will become allied to the Player. They will appear green on the Map and will follow around the character who freed them. If they are kept safe for a while, they can potentially become Player Characters. Otherwise, they will run off into the wilderness to join back up with their faction.

In some locations such as Tengu's Vault and the Dust King Tower, Unique Recruits are being kept prisoner. They will join the Player Faction after being freed.

Animals purchased from Nomads, Farm Shops, or Holy Farms automatically become Animal Player Characters and do count towards your character limit. More information on purchasable animals can be found on Guide to Animals.

You can recruit a character by triggering a "You saved my life!"(FCS name) dialog.

"LT_MY_LIFESAVER" tag on your character; (Which probably means you have to heal them from the "dying" state. I didn't test this as i found this by accident during my ~3rd playthrough)

If saved character has "DC_IS_RECRUITABLE" tag it must have "PT_HONOURABLE" "DC_PERSONALITY_TAG" or one of these dialogue packages:

note: Due to these conditions it is possible to recruit characters with very high skill and attribute levels, such as named anti-slaver jonins (~80 stats in almost all skills and attributes (not counting racial bonuses which can boost them up to 90+)). [game version 1.0.51]

This is a comprehensive list of every character that can possibly be recruited in vanilla, race, their method of recruitment, and price if applicable.