Noble Hunters are unnamed Traders Guild nobles with Diplomatic Status. They can be found patrolling with a Noble Captain and six Hooded Empire Noble Guards, along with a number of slaves.

This character can spawn in Stormgap Coast, The Great Desert, and The Hook, as long as Emperor Tengu has not been killed or imprisoned.

While Noble Hunters tend to hunt purely for sport, they seem to hold Skeletons as high value trophies, prompting unique dialogue when they fire on one.

Note that the slaves accompanying them will attack you should you decide to retaliate. Defeating the Noble and their guards before knocking down the slaves may result in them escaping or joining you.

They wear [Specialist] armour (10% chance of [Masterwork]) and have weapons manufactured by Skeleton Smiths or Edgewalkers. 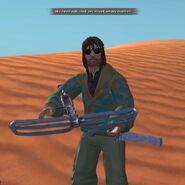 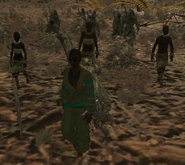