Edit
watch 02:17
New Pokemon Games - The Loop
Do you like this video?
Play Sound

The Mercenary Leather Armour is a Medium Armour that is equipped in the Body Armour slot. It can be bought from Shek Kingdom, Tech Hunters, Mongrel, and United Cities armour shops.

This armour has inventory dimensions of 4x6.

Mercenary Leather Armour is built from several different pieces of leather covering most of the front chest, part of the stomach, with several leather pads strapped on the arms and hands. Currently the in-game model looks very similar to Mercenary Plate minus the shoulder guards, giving less coverage to the arms compared to their plated counterpart. 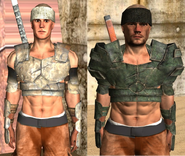 Compared with Conscript Leather Armour, which on appearance should be a white version of Mercenary Leather Armour, they do offer different protection against blunt and cut resistance with the amount of difference being variable, depending on the grade. Harpoon resistance is the same or just one point in favour of the Mercenary version. The coverage and the skill penalties are always the same. The value of Mercenary armour is always higher than Conscript.

Starting the comparison at prototype grade, Conscript does not provide any protection all, thus is Mercenary the better choice. When quality is improved to shoddy grade, the Mercenary armour outclasses the counterpart with 2%, 4% more blunt and cut resistance and 1 point in harpoon resistance. At Standard grade, the Conscript version offers 2% more blunt resistance, at the expense of 1 point harpoon resistance, making the armour slightly better than the Mercenary version.

Compared to high quality, they offer the same protection, expect harpoon resistance. From Specialist quality onwards, Conscript offers more blunt resistance, while Mercenary armour offers more cut resistance. The difference in protection are 2% for blunt and 4% cutting. At Masterwork, these differences are 4% and 5% respectively.

As conclusion, Mercenary is better at low qualities, near equal at standard and high quality and offers more cutting resistance at specialist and masterwork, but at these grades, offers less blunt protection compared to Conscript.

With this we would have the basis to make our own clothing and light armour. The same equipment could also be used to make under-armour and bandages.

The blueprint can be found at Deadcat, regular Armour Traders and is sold in The Great Library in Black Scratch. It can be crafted at a Leather Armour Crafting Bench after researching the appropriate blueprint.