Major Towns are locations where many different types of Vendors can be found. Often, Major Towns will contain more than one Bar. Major Towns tend to be large settlements with many buildings and residents. They often have a large selection of stores and multiple buildings for sale. They are also the only items on the map that can be seen at any zoom level, besides your own settlements.

The zealous fanatics of the Holy Nation inhabit these towns. They are not safe for non-human Races without Human escort. Even then you may encounter trouble with the residents and guards. Skeletons should stay away at all times, as they are killed on sight regardless of any escort.

These towns belong to smaller more minor factions. They often only have one town, and in some cases may not even exist outside of these towns. They are safe for all Races unless otherwise specified. 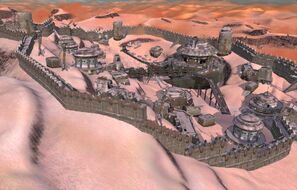 Heft, the capital of the United Cities
Русский
Community content is available under CC-BY-SA unless otherwise noted.
Advertisement