Bonefields, Leviathan Coast, Sniper Valley, Stobe's Gamble
A Leviathan is a humongous beast indigenous to the Leviathan Coast in the northwest region. A towering beast of the wild with incredible integrity, they can crush an entire squad of men under their iron feet.

The exception to this rule is if an encountered member is in a squad of three or more, in which case the Leviathan will take the intrusion as an affront and attack anyone who wanders near it. 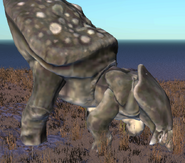 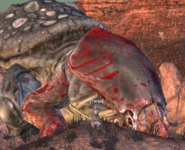 They have very high vitality which makes them difficult to incapacitate. Because of their size and power, their attacks can instantly down any unit in 1-2 hits with potential instant death, unless they're heavily armored and have high toughness. Therefore ranged combat with crossbows is extremely advised. Alternatively, players may use mounted turrets such as crossbows or harpoons to inflict high bleeding damage on Leviathans. Avoid fighting it with multiple melee fighters as their attacks have high AoE.

But if one is truly intent on slaying one of these Goliaths, be sure to use their slow speed and titanic size to your advantage. Because of their slow speed leviathans can be easily kited allowing you to in relative safety let loose a shot.

Alternatively you can lure them onto rough terrain which because of their size they often get stuck on. But be warned because of their large health pool they can soak up a shocking amount of bolts. So it is best to prepare a large quantity of bolts lest you be left with nothing to show for your efforts other than a thoroughly enraged leviathan and an empty backpack.

It is also important to note that they have a small aggro range compared to most other beasts. Combined with their slow speed, it makes it fairly easy to run from them if needed. Leviathan's average speed is 8 mph so as long as your speed is 10 mph or above you can out run them.

If you are planning on using a sword to fight them, it is advised to use the Falling Sun heavy weapon because it has a 50% buff against leviathans, as well as a good overall damage.

You also may get harassed by Beak Things while battling with Leviathans.