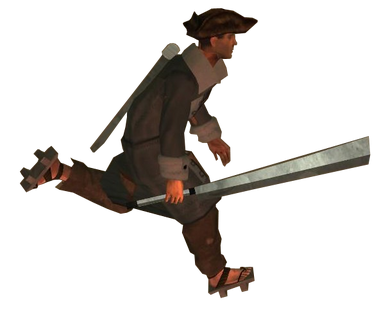 Humans are the most populous race in the world of Kenshi. Human is also a race category which includes Greenlanders and Scorchlanders.

Greenlanders are the most similar to humans on Earth. They serve as a reference point for hunger and are generally well-rounded in terms of stats, since they do not have any innate racial skill penalties, and their bonuses only apply to farming, cooking, and science.

Scorchlanders are anatomically similar to Greenlanders but are differentiated by their much darker skin color, glowing eyes, and silvery hair. They are more specialized compared to Greenlanders, as they have innate racial bonuses in armor smithing, weapon smithing, dexterity, dodge, stealth, and athletics.

According to theories that can be drawn from clues and text in the world of Kenshi, humanity dates much farther back than the modern age, being alive during a much more technologically advanced First Empire. Whether or not humanity predates skeletons is unclear, and this is only one of the mysteries that complicates the history between skeletons and humans. Humanity has been able to endure a number of natural disasters and conflicts that has plagued the world of Kenshi, but many of the humans you meet within Kenshi are apparently unfamiliar with their own history.