Stout Hessian Uniform
Holy Servants are a low-ranking caste in The Holy Nation, often seen acting as the companions of Paladins.

All Holy Servants are human males, and outrank Lower Servants. They appear to have a social status similar to serfs or peasants, rather than slaves. Instead of working in the mines, they appear to preform militia and shopkeeping duties. Holy Bakeries in particular are managed by Holy Servants. In some cases, they can also be seen as assistants of Holy Priests.

Still, the fact that many Holy Servants have escaped to join the Holy Nation Outlaws suggest being a Holy Servant is not a desirable status.

They wear [Shoddy] armour (5% chance of [Standard]) and have weapons manufactured by Unknown. 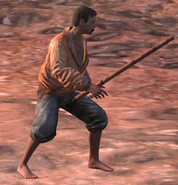