Holy Sentinels are guards and middle-ranking foot soldiers for the The Holy Nation, charged with protecting towns and assets such as mines. Sometimes they patrol, usually led by a Paladin.

They frequently stand at the gates of Holy Nation towns, checking outsiders for contraband.

Holy Sentinels are distinguished from Paladins in that they use Combat Cleavers instead of a Paladin's Cross, and have slightly weaker stats. In terms of appearance, Sentinels have reddish armor with a white emblem, while Paladins have more grayish armor with a yellow emblem.

They wear [Shoddy] armour (10% chance of [Standard]) and have weapons manufactured by Ancient. 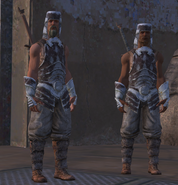 Holy Sentinels on guard at a gatehouse.

Holy Sentinels marching past a Doctor