Edit
watch 04:03
Wiki Targeted (Games)
Do you like this video?
Play Sound

Heft is a town located in the southeast of the map. It sits on top of a cliff face and is characterized by a large metal cage near its center. Nearby towns include Bark and Black Scratch. Heft is controlled by Dead Cat.

Heft made it into the final release of the game as a capital of the United Cities. 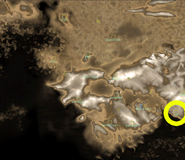