c.60,000
The decapitated head of a King Gurgler. This trophy is worth a heavy bounty.
The Gurgler Head is an item only obtainable from the unique King Gurgler in the Island Lab. Taking it kills him instantly. Upon bringing the head to police stations and attempting to collect the bounty, the guards will not take it, but rather congratulate you and tell you to look for a collector that would take it as a trophy.

The head is valued at 60,000, making it hard to sell. Most merchants only carry around 25,000 Cats in their store's inventory upon the start of a new day, forcing you to buy lots from them first. Possible ways to trade the head is to go shopping at the Scraphouse for AI Cores or at The Great Library for Blueprints.

A hidden feature of the King Gurgler head is that if you are carrying the trophy in your inventory while in local towns, random non-party characters will remark on a "Stench" that they smell close by resembling rotten fish or sewage, occasionally choking as a response to the stench as well.

Like the Fog Prince Head, before this item's own icon was designed, it made use of the icon for Potatoes. 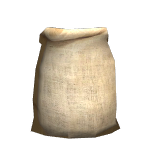