The Fogmen (also known as the Deadhive) are a savage group of Hivers lurking within the Fog Islands. Anyone who enters the Fog Islands are doomed to be attacked by the Fogmen. Captured victims would then be offered up to their respective Fog Princes as a ritualistic feast.

Their main weakness is that the Fogmen are only barely able warriors, and are individually very fragile. To make up for this weakness, they roam in large groups of Fogmen and Fog Heavies. Any time a group of Fogmen are attacked, there is a chance that more Fogmen will appear to swarm their adversaries. With their vast manpower, they can even take down a group of skilled warriors. 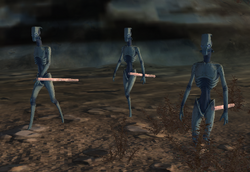 They are known to be controlled by a brain affecting parasite, but the details are unknown. Though it appears that it is impossible for them to regain control of themselves by any means.

If both of Hiver queens are dead, Fogmen will spread to all of the former Hiver locations, supporting a theory that Hivers cannot function without pheromones of their queens, even if separated from them.

This faction has no special relations towards any other faction. For all factions, it will use this faction's default (-100).