Fog Deathyards are randomly spawning camps, similar to animal Nests. They can spawn in the Fog Islands. They consist of a series of Torch Posts, stakes decorated with bones, and Prisoner Poles.

Humanoids knocked unconscious near enough to a Deathyard are brought to the Prisoner Poles and worshipped by some Fogmen and eaten by others, often at the same time. Fog Princes are often attracted to prisoners and can be found eating the captive. 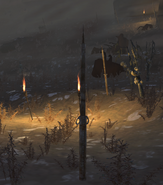 Prisoner pole at at Deathyard.
Add a photo to this gallery

These are the standard squads which have a chance to spawn at this nest. More information about these squads can be found in FCS.

This squad contains a Fog Prince and 3 to 5 Fog Heavies.

This squad can contain from 13 to 25 Fogman characters.

No items spawn at a Fog Deathyard.

Retrieved from "https://kenshi.fandom.com/wiki/Fog_Deathyard?oldid=72057"
Community content is available under CC-BY-SA unless otherwise noted.