Gates are structures used to allow free passage across other static defences such as defensive walls. There are four tiers available, each requiring its own technology to unlock it and additional resources to build. Similar to walls, during construction the blue arrow should point towards the outside of your city.

Makeshift Gates are the first type of gates which players can construct. Players must research Makeshift Walls in order to build. Once Defensive Walls is researched, it can be upgraded to the next tier.

These gates are made of scrap metal sheets and have barb wire strands across the top. Unlike gates in previous versions of Kenshi, the Makeshift Gate has a raised platform where a cylinder shaped gate house is located.

Exterior
Defensive Gates have a metal portcullis and allows for Spotlights to be mounted on them. They are the upgraded version of the Makeshift Gate and can be constructed after completing the Defensive Walls research.

After the research is completed, previously built Makeshift Gates can be upgraded to a Defensive Gate by clicking the "upgrade" button in the building information pane.

Exterior
Tier III defensive gate that allows Spotlights to be mounted on it. The gate itself has 60 max condition.

Exterior
Tier IV defensive gate that allows Spotlights to be mounted on it. The gate itself has 90 max condition.

The Defensive Gate was added to the game in version 0.65.0 as a new type of defensive gate. 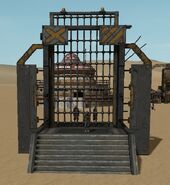