roaming, nesting
Primarily found in The Swamp, Blood Spiders hunt down and suck the nutrition of live prey. They deal approximately 70 damage per hit of equal amount blunt and cut.

They attack in groups and are more dangerous than, say, an average group of dust bandits. Blood Spiders are highly resistant to bleeding damage and recover consciousness quickly. They will try to eat an unconscious or dying character by draining their hunger.

There is also a rarer, and stronger, variant known as the Elder Blood Spider. 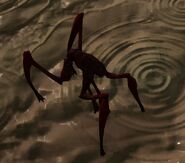 The regions Shem and Venge may also spawn Blood Spiders in small groups. The chances of spawning these groups in Shem is 1/26 and in Venge is 2/63.

Standard Blood Spider swarms can contain from 1 to 10 spiders. These spiders will be roughly adult age.

Small groups of Blood Spiders can contain from 1 to 3 spiders.

Besides spawns, Blood Spiders can also be found is set locations around the map.

Blood Spiders can also spawn in Lost Library outposts. These swarms will be nested and will not roam the rest of the region. These swarms can contain from 6 to 15 spiders. These spiders will almost be fully grown.

The Bugmaster can have from 6 to 10 pet Blood Spiders.

If Big Grim, Big Darkbrow and Big Gray are all dead, Rot will be destroyed and invaded by Blood Spiders.