Black Scratch was a town located in a small valley near the south of the map. Nearby towns included Eyesocket, Fisher (later renamed to Fort Simion), and Heft. Black Scratch is a part of The Holy Empire. The town made it into the final release of the game. 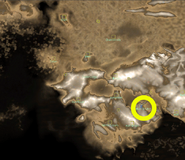