watch 04:21
Wiki Targeted (Games)
Do you like this video?
Play Sound

The Armour King is a Skeleton merchant who sells Armour gear in Armour King's Shop. He is a masterful armoursmith who produces high-end armor to give travelers superior protection.

Worth noting, he is extremely skilled in combat and is also protected by his Security Spider II sentries, and his personal thralls, who are also extremely skilled. He is one of a few traders who actively follows player's character around the shop and some way outside it as well.

He can be found at the Drowned Ruins in the northwest of the map, in the river next to the Arm of Okran. The only way to reach him is by swimming along the river, entering either from the south side near Blister Hill or the west side near Floodlands.

He belongs to the Skeletons faction.

They wear [Masterwork] armour and have weapons manufactured by Skeleton Smiths.

We do know that Armour King has travelled around the world (he uses it in his sales pitch) and that he took Thralls from the Ashlands and modified them to work in his shop. Whether he took already broken skeletons or did something more sinister is not elaborated on. 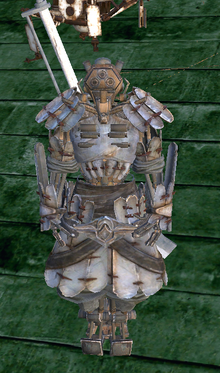 Retrieved from "https://kenshi.fandom.com/wiki/Armour_King?oldid=73897"
Community content is available under CC-BY-SA unless otherwise noted.